In 1946, Rev. Arthur L. Hillmann was called bythe Mission Committee of the Oregon-Washington District of the Missouri Synod to establish a new mission, one that became Messiah Lutheran Church. Rev. Hillmann was installed on October 6, 1946, and the groundbreaking ceremonies took place on April 27, 1947. 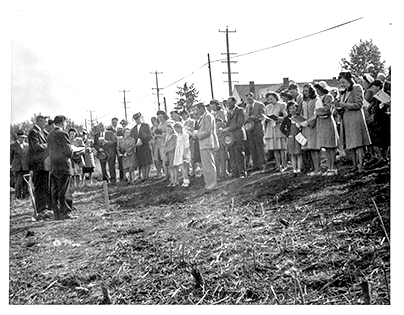 God blessed Messiah under the leadership of Pastor Hillmann so that membership neared 600 by the time of his departure to Concordia College, Portland in 1968. Growth dictated the building of the current sanctuary which was dedicated on May 1, 1966. The addition of Hugh Visser in 1965 as Lay Evangelist emphasized the congregation's concern for reaching out to those without Christ. Hugh served in this capacity until 1971.

Messiah's second pastor, Rev. Fred Huscher, was installed in July, 1968 and served until June of 1973 when he was called to a congregation in California. During these years Messiah continued to grow and flourish.

Rev. Theodore Kriefall served as Messiah's third Pastor from June of 1975 to October of 1986. During this time, the tradition of having a second worker was continued with John Baker serving as Minister of Youth and Education from July of 1980 to December of 1983. Mark Schoepp served as Director of Christian Education from March of 1985 to August of 1987. Fred Neidhold was contracted as a Lay Minister from September of 1987 to May of 1989.

Rev. Ernie Lassman was installed on January 10, 1988 as Messiah's fourth pastor. Rev. Robert A. Rogers served as Associate Pastor from July of 1990 to July of 2002. This also marked the first time that both called workers were pastors. During these years, God blessed Messiah with spiritual and numerical growth which moved the congregation to approve the building of a new two-story education wing with an elevator for handicapped and elderly.

Beginning in the summer of 2003, Messiah began its vicarage program where a third-year student from one of the seminaries of the Lutheran Church-Missouri Synod spends a year of internship in the congregation. After one year with Messiah, the students return to the seminary for their final academic year and upon graduation receive their first call into the ministry.

Click here to see more information about our past vicars.

We are currently not participating in the vicarage program because in 2011 we called an assistant pastor Rev. Trevor Mankin, who was a former vicar at Messiah.  Pastor Mankin's call was changed to Associate Pastor in December 2013.

In 2016 Messiah called a missionary, Rev. John Krenz, who was also a former vicar at Messiah. Currently, he is deployed at our mission start in Moscow, ID. After 29 years of faithful service to Messiah, Rev. Ernie Lassman retired on December 31, 2016.  Pastor Mankin's call was changed to Senior Pastor in January 2017.

After 11 years of service at Messiah, Rev. Trevor Mankin received a call to Sacramento, CA in October 2021.

In 2022, Messiah Lutheran Church's call for a new shepherd was received by Rev. Peter Elliott. He was installed July 31, 2022.

The Word and the Sacraments are emphasized at Messiah as God's means for giving us the Holy Spirit, the forgiveness of sins, and eternal life won by Jesus Christ with his life, death, and resurrection. Therefore, faithful worship attendance, the study of the Word, and telling others the Good News of Jesus Christ are important to the members of Messiah.

We trust in God's grace to bless us in the years ahead as He gives us both the desire and the ability to be His people and serve Him in His Kingdom.