Rev. Adam and Deac. Melissa DeGroot serve the Lord through The Lutheran Church—Missouri Synod (LCMS) as national (domestic) missionaries in Albuquerque, N.M. In this role, Adam and Melissa are responsible for planting a new mission congregation in Albuquerque. They see to the needs of many military families and indigenous Native American, Central American, Mexican American and South American immigrants. They also hold regular Divine services at St. Andrew Lutheran Church, a church plant and their current mission congregation in Albuquerque.

Melissa was born in Springfield, Mo. Growing up, she attended Our Redeemer Evangelical Lutheran Church, Smithfield, R.I. Adam and Melissa have one son, Knox, who is a ninja in training and with whom they enjoy spending time.

Pray for the DeGroot family as they serve in Albuquerque. Ask God to continue to strengthen them for the work He has created for them to do in this city and the surrounding areas. Pray for the current and prospective members of St. Andrew Lutheran Church. Pray also for the men and women who faithfully serve the members of the community and church through their public service. Ask God to soften the hearts of the people of Albuquerque and direct them toward the saving Gospel of Jesus. Ask God to open the ears of His children to hear the Gospel in this country and around the world. Let us give thanks for the DeGroots serving as missionaries in Albuquerque. 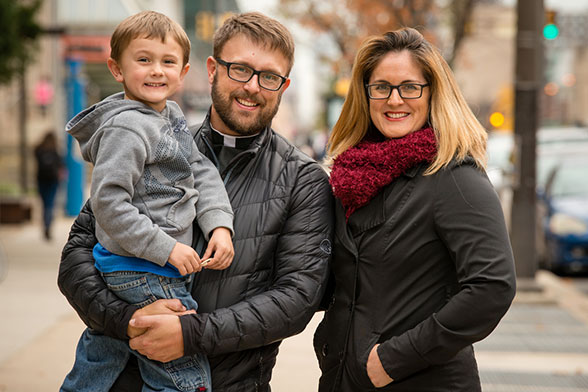 By Giving Online: You can support this family’s ministry by giving online.  Just click the button below and complete the secure online form.